Skip to the content
Home > Insurance Blog > Can You Raise Backyard Chickens Without Changing Your Lifestyle?

Can You Raise Backyard Chickens Without Changing Your Lifestyle?

Posted by A Security Insurance Agency on July 26, 2016 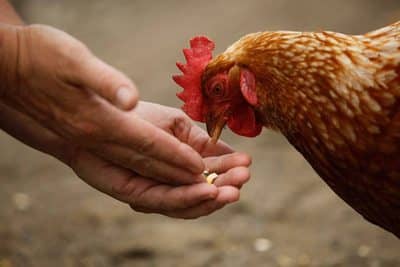 There are a lot of ways homeowners are getting back in touch with nature. Some dig up high-maintenance lawns and install raised garden beds to produce their own food. Others save kitchen scraps and compost them in the backyard to reduce the amount of waste they produce. But there’s another growing “back to nature” trend: Enter the world of backyard chickens.

So, why the growing interest of late?

Ludlow, who is also co-author of such backyard-chicken-themed books as “Raising Chickens for Dummies” and “Building Chicken Coops for Dummies,” says people are increasingly interested in becoming more self-sufficient, and that chickens are easier to raise than cows, pigs and even large gardens. You can have a handful of egg-laying hens in a relatively small yard without drastically changing your lifestyle, he says.

“Chickens eat bugs, generate fantastic fertilizer and even make you breakfast.” There’s also increasing preference for eggs from chickens that were raised humanely, Ludlow says. When you collect eggs from your backyard flock, you know exactly how they were treated, fed and cared for, he explains.

A third element driving the backyard chicken trend, says Ludlow, is growing awareness of how fun and easy it actually is to do. “[Chickens are] a multipurpose pet,” he says. “They eat bugs and weeds in your yard, generate fantastic fertilizer and [even] make you breakfast.”

Things to know before getting started

So let’s say you’re a complete newbie when it comes to this backyard chicken business, but you think you’d like to give it a try. Where on earth do you start?

First, you need to make sure that it’s legal to keep a small flock of chickens in your community. You don’t need to live in a rural area to raise chickens; some big cities, like Chicago, allow for it (Editor’s note: See our fun map identifying chicken-friendly suburbs around Chicago).

Rules and ordinances vary widely, so check in with your municipality to inquire. (Tip: Even if it’s legal in your town, you might want to avoid getting a rooster. Enthusiasts will tell you that it can be a surefire way to annoy neighbors.)

Next, decide what stage/age of chicken you’d like to acquire: eggs that you’ll hatch, baby chicks, or grown hens. Ludlow’s website goes through the pros and cons of each option:

Hatching eggs: They require a good incubator and have specific humidity and temperature requirements. You may also need to hand-rotate the eggs, and, once they hatch, you’ll need to know how to care for baby chicks in a climate-controlled environment. Like caring for “baby anythings,” this can be a lot of work, Ludlow says.

Chicks: Whether you buy the baby chicks locally or by mail, know that they will need a lot of care until they’re “feathered out” at about 8 weeks, says Ludlow.

Grown hens: If you get grown hens, you’ll need to be ready with a secure coop or “chicken tractor” (a mobile containment unit) with nesting boxes, roost and roof. There are a ton of options out there, Ludlow says. (Be sure to check with local officials first, because some municipalities have fees and other requirements for coops.)

How much should you budget?

Costs will vary widely by state, by the breed and age of chicken, etc. But Ludlow offers the following estimates of costs required to raise backyard chickens:

Coop: Anywhere from $50 for a secondhand or recycled coop to $600 for a new one; DIY instructions abound.

Feed: $3 to $4 per bird, per month, depending on whether it’s commercial chicken feed, your own mix, or if you let chickens forage for bugs and seeds in your own yard.

Extra start-up costs: A feeder, water and, if you’re raising chicks, a brooder (a heated enclosure), may run you $60, Ludlow says.

Miscellaneous: Budget $10 per month for miscellaneous supplies like wood shavings (for bedding) or egg cartons for your eggs.

Other things to consider

Eggs. The number of eggs a chicken will lay depends on three things, says chicken supplier MyPetChicken.com: the breed (those bred for egg production can lay an egg per day); the hen’s age (they begin laying eggs at 4 months of age, but lay best during their first year); and the season (in the winter, egg production drastically decreases). A healthy, young hen bred for egg-laying can lay almost an egg a day, the site says.

Waste. One aspect many people overlook is the, er, waste that comes with raising chickens. According to the Urban Chickens Network, three hens can produce about 5.5 pounds of droppings per week. Some people compost some of it to fertilize their own gardens (check local ordinances; some don’t allow the practice), while others sell it (or give it away) as fertilizer to other gardeners.

Time. Once you’ve set up the coop and outdoor area for your chickens, you’ll then need to feed them, change their water, clean the excrement, etc. “[The time commitment] varies considerably, but in general, a flock of five to six chickens is less work than an inside dog or cat,” Ludlow says. “Fortunately, chickens are easier to care for than most other pets.”

5 Fun Chicken Facts:
1. Chickens aren’t flightless – they can get airborne enough to get over a fence.
2. Female chickens are called pullets until they’re old enough to lay eggs, when they’re known as hens.
3. Hens can lay eggs without the assistance of a rooster (they only need roosters to lay fertile eggs that will hatch).
4. Backyard chickens commonly live for 10 years or more if they stay healthy.
5. You can usually tell the color egg a hen will lay by looking at her earlobes.